With the transfer of the movie screening industry to a digital platform, the flow of technology innovations in the industry has quickly overgrown from a narrow stream into a deep river, and it continues growing to ocean scales. Almost every major annual cinema exhibition presents new models of projectors, servers, 3D systems, new sound and tactile formats.

The most vivid trend of today's cinemas, both in general and figurative senses, is a new generation of laser light source projectors. But is it a new epoch of digital movies or some extraordinary extension of an equipment producer range? It is true what they say about high prices for these projectors? Can such technologies be applied in Russia? Would it be popular?

Sergey Puskov, the general director of Kinocomfort, talks about these and other aspects of "laser" movie screening.

IMMERSIVE SOUND IN A CINEMA HALL – DOES IT WORTH THE MONEY? 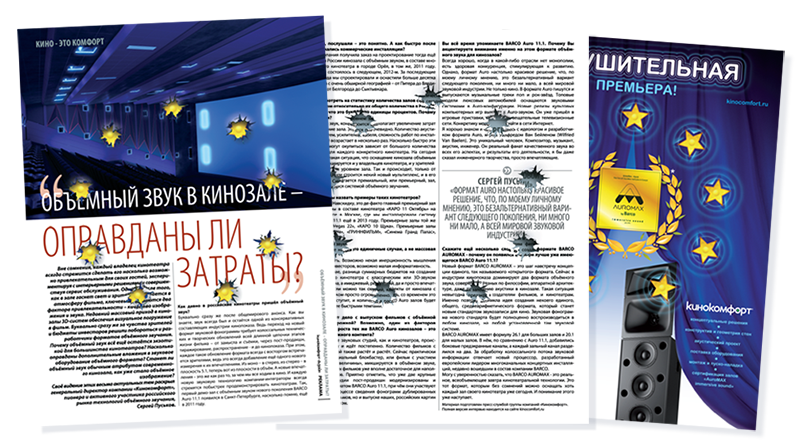 It goes without saying, every cinema owner always tend to make it as attractive for guests as possible trying various interior solutions and perfecting the service. However, when the light goes off and a viewer dives into a movie atmosphere, there are only two attractiveness factor – the quality of picture and sound. The recent introduction of 3D systems made it possible to visually immerse into a movie. Right after this, the developers of immersive sound formats were all set to fight for viewer feelings and investor budgets.

Sergey Puskov, the general director of Kinocomfort, a pioneer and active participator of Russian immersive sound market, has shared his views on these actual topics.